I love Halloween, always have done, always will, although it doesn't hold as much sway with me as it once did. Getting dressed up, meeting up with friends, sharing creepy tales with each other. I love that for one day the witches, warlocks and wizards of the world are allowed to be themselves; they're not berated by those who don't believe in such things. I look forward to this day every year, hoping that maybe, just maybe, I will see or experience something that will change my life, my outlook; these days I hold on to the hope it may even make me a believer. At the end of the day, I should believe. My own grandfather, my flesh-and-blood, the man whose DNA courses through my body was born and raised in Salem - yes, that Salem. The one in Massachussetts, USA, home of the famous Salem Witch Trials. If my theory about Ghosts:DNA is correct then being the decendant of such a man should count for something.

Yet I don't believe: in ghosts, gods (there are so many of them depending who you are, where you're from or what you believe) or the devil - thats not to say I don't believe in good/bad (or evil). I have seen (and experienced) evil but always, always, at the hands of a living human being; not some made up entity used as a scare tactic.

I love how we have embraced some aspects of American society when it comes to halloween. Over there they go all out, dressing up their homes; having been stateside a few times during October I've been in awe at some of the amazing displays I've seen. I would love to do the same to my house, however, there is one part of the Americanism I do not like (really don't agree with). It's also what stops me from decorating our house, because it is expected that a decorated house means you are willing to participate in "Trick or Treat". I am not, nor will I ever be.

I do not, I never will, agree with Trick or Treat. That's one thing which should have stayed the other side of the pond. What kind of lesson are we teaching children when we allow them to knock on the doors of strangers who are expected to hand over goodies and treats to those kids. If they choose not to - for whatever reason - those kids then think it acceptable to play a prank (some take it even further than a little annoyance). We're telling them "it's ok to blackmail someone into giving you something; they'd rather hand over candy than have you egg their windows, destroy their greenhouse, paint their car". Those are quite drastic actions to be taking - sadly many of them have occurred - and for the mostpart the tricks are just that; a trick, however, even just hanging a thin piece of spider webbing across the doorway of someone who has not given you a treat should not be acceptable.

I've been pulled up many times by people for saying I don't agree with it; that's fine, we all have our opinions. For the most part kids treat it as it is, because the home owners do hand over the treats, but I wonder what would happen if they didn't! We're already bringing up a generation of those who believe themselves to be 'entitled', the world revolves around them. Kids aren't used to being told "no" in the same way they once were. I'm not saying don't dress up, don't have fun, I'm just saying I don't agree with random children knocking on my door expecting me to hand over treats to them, even more so at the moment with the way the world is. So many people are struggling to put food on the table, to then be expected to give away what they may have had to scrimp and save to be able to afford in the first place is not right.

I'm not saying don't do anything for it. Get all dressed up - nothing better than a good costume - bake some cakes, decorate your house, but invite people round to share the evening with you. Set up an Apploe bobbing area, make some smores around the fire pit - share your creepy stories. Just don't let your little terrorists loose on your local neighbourhood. 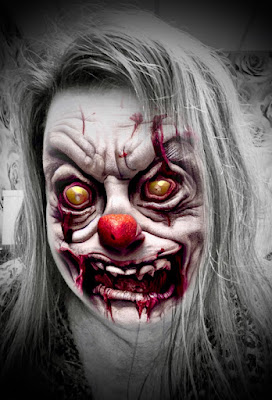