What it comes to money I've never been the luckiest person at being able to, not only earn it, but to keep it. I wasn't academic so was never going to be a top lawyer - mind you my opinion of those has dropped today when the one I am paying £265 per HOUR, doesn't know the difference between the words Quite and Quiet (I'm genuinely shocked she's charging £45 for a letter littered with spelling mistakes - she addressed it to me as Mrs, when I'm a MISS) - or a brain surgeon. I was only ever going to be middle class when it came to work/earning, and that's fine. We all have our talents; mine wasn't being intelligent - as those of you who follow my ramblings will know; my vocabulary is very limited. However, I'm a grafter, a hard worker. Even when working for others I've never worked less than a 50 hour week. I've done that every week since June 7th 1986. For the first 2 years I was allowed just one week off per year and I worked a 6 day week. I wasn't paid overtime so all the Sundays I worked was just part of the job. Since then working laws have changed slightly but I know there are still some out there who treat their staff in a similar way. I did have a 7 week break in 1996 when I was "between jobs". My choice; I came into a very small inheritance but that afforded me the luxury of having a little bit of time to myself. It was 'all go' before then, and has been ever since.

I've never taken money from anyone - yes, a friend went into business with me and he funded our business, however, he's had every single penny that he invested back (because of how hard I have worked) and now is able to draw a wage from the business when he doesn't really do any of the work - occasionally he'll do a delivery. Everything I own I have worked hard for and paid for myself. Since 1993 I've done that with a financial noose around my neck too, where an ex took out a loan in my name, and never paid a penny of it back. We split, he did a runner and I was left to pay it off; the downside to that was I didn't have the money to pay it off and trying to get out of debt (and many thousands of people do) I ended up having to go deeper into debt. You are right, I could have used the small inheritance money to pay off a chunk of the money I still owed but I didn't; I chose to use it for me, taking those 7 weeks off (2 of which I used up starting my bucket list of visiting all 50 US states). That was the money gone (so it wouldn't have even made a dent in the debt I was left with) but at least I got to make some wonderful memories which have helped me get through some tough days since.

The ex who screwed me over is also the same man who made a mistake at a game of bingo once (back in the day when it was a popular Wednesday evening out) and lost out on the £50k grand prize which would have been ours - mind you, he'd have probable stolen that from me as well had he not fucked up. For a while I took comfort from knowing he did it to a few woman after me, however (and this is why I do not believe karma exists) he eventually ended up screwing his own family out of the family home (completely mortgage free) and his wife got an almost 200k payout for having a bus graze against her when she was stood in the road. You literally couldn't make it up. They've conned their way through the past 30 years screwing over people left, right and centre, and still end up getting everything they could ever have wanted. Being a decent member of the human race really isn't worth it.

My Mum has also lived a similar life. She was in a nasty car accident as a child and due to it was awarded a really decent compensation; my Nan took control of that, my Mum saw little of it and all she really got from it was a minimal amount her and my Dad were able to use as a deposit on our family home - something she now regrets because at-the-time they were offered a council property; had they taken up that offer they'd never have had to worry about repairs on any property and would have had spare cash at the end of each month, something they never had, as, like me, neither were academic, just hard workers and grafters for a minimal salary.

Because there was never any spare money when my Dad died he wasn't insured; they'd just remortgage the house to do some repairs (council would have done it for them) and to do up the bathroom (which had been the same since they'd moved in 25 years earlier). This meant that as I was finding myself with a debt I could never afford to pay back, my Mum was also finding herself in the deepest debt too. Both of us have worked our arses off to try and better the situation all to no avail.

16 years ago a great aunt of mine passed away; her property was left to my maternal grandmother. She received a substantial amount. My whole life my Nan had always told anybody and everybody, that when she passed my grandfather wasn't to receive a penny of anything. She also said he was not to live in their home (which I think she paid for). She died and he got the lot. Everyone who knew her believes she had a will but we were never able to find it, my grandfather said their wasn't one and he got the lot.

For 15 years he watched us struggle, scrimp and work hard, all the while lauding his 'fortune' over us. If he told us once his home was worth "at least 70k" he told us a hundred times. All the cash he told us he had in multiple savings accounts. This was to be left to me, my Mum and my brother upon his death, and he told us it "will set you up for life'. We knew how much my Nan got from my Aunt; adding this to the 70k he said his home was worth and we would have been looking at a decent amount of money. Enough for me finally clear my debt, go on a nice holiday and potentially upgrade my 8 year old car (only with another Dacia; I could never afford a proper car).

My grandfather passed away in May. He did leave everything to us, however, there was nowhere near as much money as he claimed, and today we've had an offer on his property; a whole 30k. For the first time in my life I dared to believe that maybe, just maybe, something good was about to happen, that life was finally going to show me that good things can happen to good people and whilst we will be looking at just under 10k each once all the other bills are paid (the solicitor charging a small fortune and outstanding debts my Grandfather had) and this (to us) is still a huge amount of money I also feel as though someone had kicked me in the stomach - HARD. Don't get me wrong, 10k is massive to me and will be life changing, but when there was the promise of 3 times that I can't help feeling a little deflated, even more so when I look back at what's happened and how those who wronged me have fared. Then I think about all those who have lost everything and have nothing compared to the minimal things I have and I feel guilty for how I feel; I know it's all relevant to each and every single person, but even so; I have the whole world and more to someone who has nothing and one day I quite possibly will do, for if anything happens to my Mum I will be homeless. This is part of the reason I wanted to be able to enjoy some of it for now. 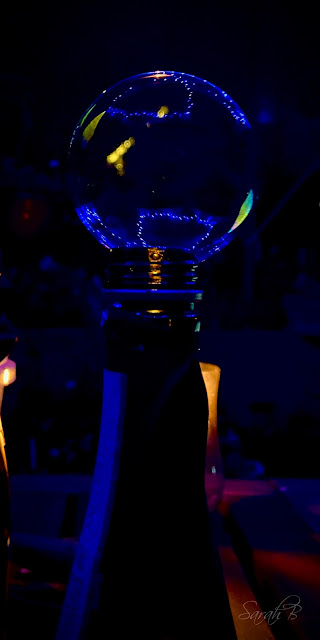