Why are they trying to get rid of me?

I currently find myself in a really weird position - not that kind; I'd certainly not be tapping on a keyboard if that was the case!

As you'll know if you read my entry about QA hospital - who still haven't got back to me about the missing personal items my Grandfather entered the hospital with, but we've never had back; it's been almost 2 weeks since I was told to register my complaint - you'll know that my Grandfather passed away. He didn't have a lot (although the rubbish bags we've filled might argue with that comment) but he has left us his caravan. Don't get excited; it's worth peanuts (in fact we'll probably have to give it away) but the amount of people who have said to me "So, are you going to move into it then?" has been phenomenal. Don't get me wrong; if I had the money to do it up (it needs completely gutting and rebuilding) then I'd maybe consider it. The outside is sound, the winders were all replaced 2 years ago) it has a new roof (guaranteed for 50 years) and at Christmas had a brand new boiling and central heating system installed, however, the interior needs a complete overhaul. I think, maybe, with the right people doing it the cost would run around 40k (more like 50k but I try to be optimistic). Great, if I had 40k I might, just might, consider it, although having said that I love the house I live in, it's always been my home and the day I have to leave (when my Mum passes I will have no choice; I'll have to live) will be absolutely gut wrenching. My parents bought it before I was born; it's the only home I've ever known. My Dad died in the living room and I'm pretty sure my Mum will die in the house too (not for a really loooooooong time yet) and that also stops me from considering my Grandfathers (again, not that I could afford to take it on anyway). My Mum with her failing eyesight would not be able to survive in the house without me. If I won the lottery (I would still keep the family home, but would definitely buy somewhere with a bigger garden and parking - don't need a bigger house, which is why the 1 bed caravan would be fine for me, however, I love my birds/wildlife and the bigger the garden the more nature I could attract) I'd take my Mum with me. If I was to meet the 'man of my dreams' (not that I've ever really dreamt about him) he'd have to understand my Mum comes as part of the deal.

Back to my Grandfathers; not only would I have to find the money to do it up, I would also have to pay my Mum and Brother money for they are entitled to an equal third. Now, whilst it's worth only peanuts, those peanuts would probably run to around 30k, so I'd then have to find another 20k to give them their share. Now I'm looking at 70k. Ok, great, some kind benefactor somewhere might be willing to offer me the money (I've seen people crowd fund for some pretty random things, and right now someone has bid 65k on a blade of grass.. a BLADE OF GRASS, that was "apparently" taken from a concert where Oasis headlined, so stranger things have happened, although when it's come to anything I've tried to sell in the past it's always ended up costing me money; not only did I end up having to give away the camera I was selling, I had to pay the fu**ing postage as well, all because I stupidly forgot to share a video of the flash popping up - seriously, when it comes to money I end up out-of-pocket every-single-time (I am very tempted to cut one of the long blades of grass from my own garden to see if I could sell it!!)) Actually, all joking aside I am staring at a beautiful plant; maybe I could sell a flower from it! If I could raise £150k from that flower it would be amazing. I could then keep my family home (I couldn't afford to run it but that's for another day, and another flower fundraiser.. haha).

The caravan would make an amazing little retirement home for me; I have another 2 decades until that moment comes though and as we wouldn't be allowed to rent it out there's no point keeping it, in the hope that I find some money before I retire to do it up, for I'd not be able to earn anything back from it, so it has to go, and I have to keep everything crossed, and keep hoping, that my little old Mum is here for another 20 years and that by then a miracle has happened and I will be able to keep a roof over my head. I struggle camping as it is these days; in 20 years time I'm not sure I'll be able to make it in a tent pitched illegally in some random woods somewhere.

I am intrigued as to why so many people think I would want to move out though, and how they think I would be able to afford to. Yes, there are times I would give anything for a whole 24 hours to myself, but for the most part I'm happy where I am, I like to know my Mum is safe, and I love our little garden (that really is going to be the hardest thing for me to leave behind - maybe I could sell the house but keep the garden and pop a little camper van in it (now there's a thought!!! - sadly the council wouldn't let me do that; I could build myself an annex at the top of the garden but when the house sells that will have to be part of the sale :( Damn our local council.

Of course, if my wealthy benefactor is out there and wants to spoil me, then please, step forward and feel free to do so. I'll even throw in a flower from the garden for you! 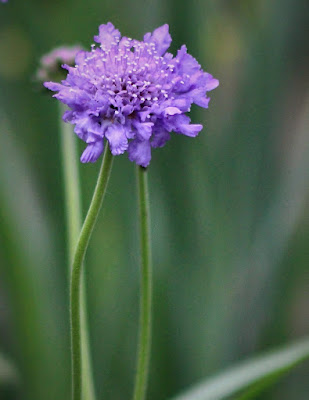