Ok; that was weird

Back in the mid 90's I lived with a guy (I didn't always live with my little old Mum) in a 'Penthouse Apartment' (that makes it sound so lavish) in an old Victorian building. Consisting 4 storeys (listed as 3 with an attic) above ground and one semi-basement level (the back of the plot was lower than the front so it was basement at the front of the building, ground level at the back) it was the biggest shit hole dive you could ever imagine, but on that top floor we made ourselves a little home. We were at the back of the building with another apartment at the front. The guy I was with had originally lived in the front one with a friend of his; when we decided to move in together, ours had just become available so it seemed the most logical move to make. They'd had the bigger of the 2 on our floor, with an open-plan lounge/kitchen, 2 double bedrooms (one of which was huge) entrance hall and bathroom. They overlooked a common with the beach and sea just beyond; we overlooked some more buildings and a road!. Having said that, you had to stand on tip-toe to see out of the windows as the upstairs of the building (which had originally been one house) was the Servants Quarters. Ours had a separate kitchen and bathroom, but the lounge/bedroom were one room. We had a decent sized entrance hall though, and a fabulously large roof terrace (I'm sure it was a bigger floorplan than our whole apartment). We had a selection of friends living in the building, as well as some directly next door so it felt as though we owned the whole building at times as we were always in-and-out of each other's homes (mind you, if we had owned it there would have been security entry to get inside, rather than a set of doors which didn't lock so anyone could wander in; I often found people sleeping in the entrance hallway when I came home late at night.)

The photos below show the front of the building - the top 3 windows belonging to my exes first apartment. The right window at the back of the building was our lounge/bedroom, the small window our kitchen; the bathroom ran the other side of the bedroom. The green railing you can see edged our roof terrace.

The photo above was taken from the edge of the beach; the sea is just behind me. 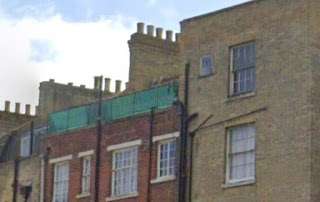 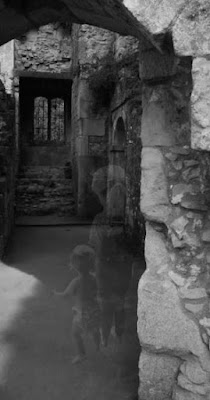