on January 08, 2022
Not the lottery; that's going to happen in a few weeks time. For now I won a photography contest. Little old me, who still isn't entirely sure of the difference between F2.4 / F11. I know it's to do with aperture but can never figure out if I should have it lower, or higher, if I'm trying to photograph a bird in flight, or for astral photography.
Don't get excited; it's not a contest that was run by National Geographic or anything of any stature, however, to me, to know a photograph I took was voted as the winner among a group of my peers; some of whom are professional photographers who have had their images printed in national/international productions, others who (like me) are still learning, and some who are just beginning on their journey in the world of image capturing is just amazing. Also, I've not actually won anything, other than having my photo used as the header photo for the group, but that's good enough for me. Of all the entries mine got the most votes. I'll take that as a win for sure.
I'm 'one-of-those' people who doesn't like to manipulate an image. To me the split-second I press the shutter button on my camera I am capturing an exact moment in time. To then start altering and manipulating that image is (to me) trying to alter time and the reality of that moment. I'm not saying there aren't some photographers out there who create amazing works of art on their computer, but that's exactly what they are. A work of art; the moment, experience they had as they pressed their button has been wiped away. When they look at the image they have created I often wonder what they see. Do they see a tweak they've missed, or a colour they should have enhanced? I cannot imagine they see the moment they took it any more because they've changed it all out of recognition. And that's fine if it's what works for them. I have a printed image hanging at home that has been created and I love it. However, when it comes to my photography, that's not what I am about. When I look back at a photo I've taken I want to be transported back to that moment-in-time. It's never going to happen again; it was a once-in-a-lifetime moment. I don't want to change that.
I had a friend once who I was out with; we were standing next to each other, photographing the same spot. When I loaded my photo's later I was so pleased with myself. The images I had captured were exactly what my eyes were seeing when I hit the shutter button. Even now, almost 5 years after I took it when I look at it I can still smell the earth, hear the water trickling. I can feel the cold and remember how dark it was. When he shared his image online later I didn't even recognise it as being the same place. Him and I are no longer friends (he ghosted me, big time, a few weeks after this trip - apparently he managed to read the private diary I kept the week we were away and didn't like something I had written about him the day we had a bit of a fall-out (no loss if I'm honest, he was a bit of a bully anyway)) which means I can't share his manipulated image but what I've done is take a look at his and alter my own photo to the same settings as the one he ended up with so you can see the difference. The original is the first photo; the manipulated the second. Exactly the same image yet so very different. The moment-in-time I captured changed forever. I just don't understand it. 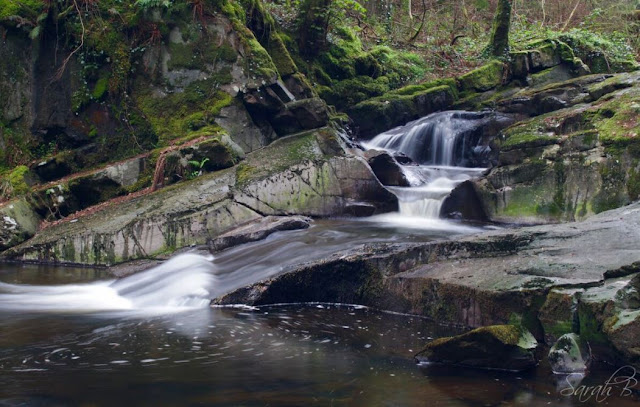 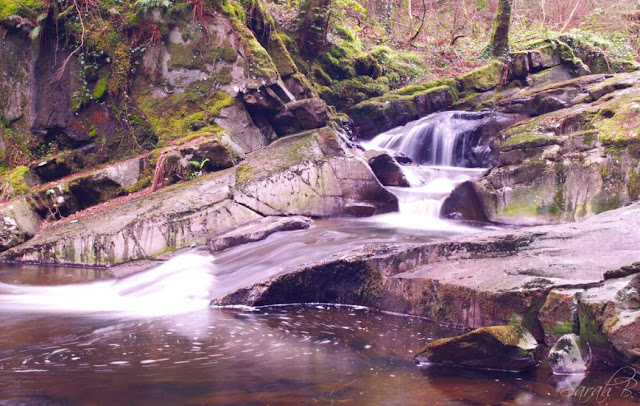 Now, having said all that, I am not averse to cropping. Sometimes I am unable to zoom in enough to capture the subject I am after (either because I have the wrong lens with me, or because the subject is that much too far away from me) so once I load it onto the computer I will take away some of the edges. I know this means I have manipulated what the camera saw and captured (to a point) yet when I look at that image I am still taken back to the moment I hit the shutter button. I've not altered the colour, tweaked definition, cancelled the noise. If I've done my job properly and input the correct settings on the camera it's going to give me a shot of what I am seeing. If I've got them wrong - which I often do - then it's going to bite me on the ass and show me how wrong I've got it by giving me a copy of an image I'm not seeing. I recently took some photos of a dunnock in my garden. I get the settings so wrong when I looked them over later I could hardly make out there was a bird there at all. My fault entirely; the camera can only do what I tell it to do, unless I put it on auto and then it's not my image to claim.
Anyway, I am digressing, although not at the same time. I've mentioned cropping because the image I submitted for the photo competition is one I cropped. I was lucky enough to be able to snap off some images of a Kestrel and until I looked at them closely afterwards I learned that their faces are blue; I had never known that before so I cropped down one of the images to get a better look at the colour on its face. That cropped image is the one I entered. That same image is the one which won me the most votes. Yes, I absolutely am chuffed with myself. 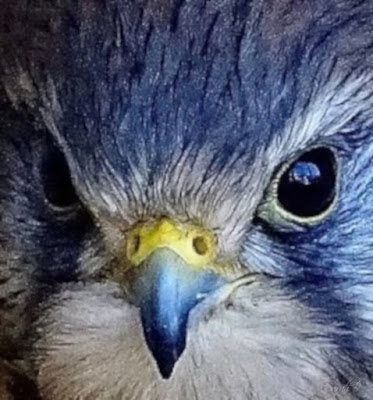