Either I've been hallucinating recently, or my brain is playing tricks on me; wait, isn't that the same kind of thing? There are those, who when they read this, will be shouting at their computer screen "imagination playing tricks, you crazy bitch, you've had visitations". As well all know I am not one of those people for I still don't believe in such things.

The first one happened last Thursday - 28th October. I put my car in reverse and as I went to move out of my parking space I could have sworn I saw someone walk behind my car. I looked left, and right, to see which side of the car they walked by so I didn't pull out and run over their foot - something I've done before and if they are holding a drink it can make a mess of the windscreen - only to find there was nobody around. Not to be seen anywhere. It all happened so quick there was no way whoever I'd seen would have been able to get themselves out-of-sight. Assuming it was a trick-of-light or something I put the car back into reverse, went to pull away and it happened again, although this time the person moved more across the back corner of the car to my left, and not directly behind me, which meant I had chance to know exactly where to look to find them (I think it was male, but really not certain).

Saturday night, after a pretty stressful day (my Mum had a fall and gouged her head and face open) I was getting ready for bed. I have a routine - as I guess most people do - and as I walked from one side of the kitchen to the other I caught sight of  a man walk by my kitchen window. As we have 6ft brick walls either side of our garden, and a locked gate it would be quite hard for someone to get into the garden, and the window he walked by leads to nowhere but a pile of plant pots so he would have fallen over them. I went straight to our back door, threw it open and looked outside to find nobody there; the weird part though was the man I saw wasn't in a solid form. He was more of an electric blue outline (yes, I am aware I'm making no sense whatsoever).

Fast forward to Monday; I was sitting in the office at work. I have the shop front security camera running on a screen whilst in there so I can see if anyone is heading towards the shop; that way I know to drag my fat ass off the chair and be ready to serve whichever customer is about to enter. I caught sight of movement and what appeared to be an older lady with gingery coloured hair (with a lot of grey in it) move by, so I got up, walked into the shop expecting her to be opening the door to come in, only to find - yet again - nobody there. I got back to the office, checked the camera to see if she had wandered off and she wasn't there; the footage ran continuously from 5 minutes before I saw her, until after I'd been looking and again, nothing. No sign of her anywhere.

One person I could put down to it being early morning, I may have still be half-asleep. The second, maybe because of the day I'd had. A trick-of-light, or something - although there are no blue lights around my back garden anywhere, but three? Three and with the third being female, whereas the other two were male has got me a little confuddled. 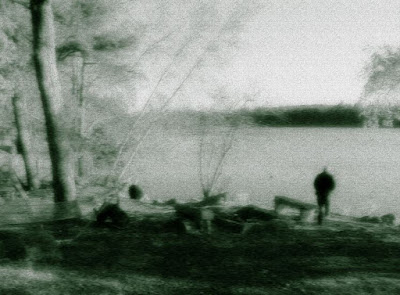 Add to those I've also been having some really vivid dreams. So far, just this week alone, I've flown a hurricane aeroplane - I literally would not have a clue how to fly a plane but I did it, and I did it well. I've been an inspector in a hospital and watched an old man slide off a bed, land straight on his butt without putting his hands out or finding anyway to help break his fall; I heard an awful crunching sound as he hit the floor. Last week I had one that when I woke up blew my mind; I can't remember it now though. Don't you hate it when that happens?

Somethings going on, me thinks, I just don't know what - yet!