I am so blessed to have a job that I enjoy - love, and even more to be able to do it for myself. However, with running your own business comes a whole heap of other issues, especially when it's a small business because in this country, unless you can hit the market at the right spot, or have friends in high places, then it can be a real struggle. My shop is an area which is dominated by people who have very little money, surrounded by takeaways, building sites and with a local council who could not give 2 shits about those of us who cannot line their back pockets. Most months I'm lucky if I can make the ends meet, which means I then have to worry about how I'm going to pay my personal bills. It's tough, really tough; some days I'm sure I would be better off (financially) working for someone else, but I'd not be happy and I learned a long time ago that being miserable is really not good for my health, and for the most part, I am happy.

I am also exhausted, to the point where when I (once again) have had to cancel plans to have some time off I cried. I have people who can come and run the shop for me to have a week off, but they want more money to do so than they will probably take so it's not a bad thing to close. That was the plan, 3 holiday plans ago. This is the 3rd one in as many months that I've had to cancel/alter and with Christmas upon us, a time when I work 20 hour days for 2 weeks, I really need to be as alert as I possibly can be.

I'm happy, probably the happiest I've been for years, if happiness is the right word to use. Maybe content would be better, no, accepting; that's what I'm feeling. Acceptance. I've learned to accept my life is the way it is and unless some crazy miracle happens then it's not likely to change. I know that I'll never be able to afford to retire; I will only have a state pension to live on and if I live to pension age I've no idea where I'll be living for I currently live with my Mum. She took me in when I had nothing and nowhere else to go. If something happens to her my brother has assured me he won't see me out on the streets, and I know he absolutely would not do that to me, but I am also aware he is legally entitled to half the house and it would be wrong of me to try and keep that from him. That house though is a mid-terrace, built in the 1960's that's had no work done on it since before my Dad was taken ill over 30 years ago. Mum never had the money; I certainly don't have the money. My Grandad did lend us the money to get the roof repaired last year, which was a bonus as the water was pouring through when it rained. My brother has sorted out the heating so that most of the radiators are now working, but our boiler and heating was fitted when my Dad was taken ill; yes, 30 years ago! There's not a floorboard in the house that doesn't bounce, and a joist in the living room being eaten alive by dry rot. We don't have the money to get those sorted, so make a point not to put anything heavy on the joist and we know which boards to avoid. The sale of the house, which by the time my Mum passes (hopefully not for another 20 years) will not generate anywhere near enough for me to purchase myself even a touring caravan, and if I could afford one I've nowhere to pitch it. I know that is what is ahead of me, that's how my future will play out, and I've accepted it. Sadly, that's life, however, I still consider myself extremely blessed because I have way more than many people have.

I'm human though; I have feelings, I get tired. I'm not just running the business; I'm looking out for an aging Mum whose eyesight is failing, and who recently is becoming very accident prone. Looking after someone who doesn't want to be looked after can take it toll, especially when it's every day. Before work, after work. Once a week we have my grandad over; he was my Nan's toyboy so is only a few years older than my Mum. He's an asshole of the highest order. Is rude, insulting and although I only have to deal with him for a few hours on a Wednesday evening, those are some really tough going hours. It's socially, and I believe illegal, to smother another human, but I'd surely like to smother him.

The week off I was planning to have wasn't going to be for just me; I'd have taken my Mum away with me so it wouldn't really have been that much of a break. I'd still be doing the same things every day, just in a different place and with the added bonus of not having to come to work.

I have friends/family, who have everything they have ever wanted and all they do is complain to me about the most mundane and stupid things. People who have everything I would give my right arm for and they go on about how tough things are and how unhappy they are. I sit there, I listen as they pour their heart out, and no matter what demons of my own I'm fighting, I am there for them 100%. I don't have anyone I can sound off my shit too.

Daily at work I have to deal with the men who are buying up all the shops in my area - the houses too. They are not the kind of men most people will mess with, although I have no worries in telling them how I feel. They want to buy my immediate neighbours shop, and mine; she was willing to sell to them right up to the point where it obvious they were only willing to do it illegally. They've tried all manner of different intimidation methods to get me to leave my shop; none have worked. I've spent my whole life dealing with bullies; I won't allow these men to bully me into leaving. I also won't allow a man to intimidate me in the way they try. The police can do nothing (or so they say - they've actually asked me to keep a note of all the other dodgy stuff the men get up to because they don't have the manpower to keep watch themselves; I turned down their offer. I'm not interested in doing their job or getting involved in it all) and the local council allow them to do what they want, when they want. In fact they have blatantly lied to those of us living in the area, assuring us they will not allow the men to do something and then letting them do it. Every day there is a different battle to be fought and I'm tired, so tired, tired to the point I often wonder what the point of it all is any more, and why I bother carrying on.

I don't do jealousy but I am envious of those people who have their shit together and for those who are able to have a day to themselves. It's been over 7 years since I had one of those. Then I get annoyed with myself wishing for those, because one day, when something happens to my Mum, I will be completely alone and most likely sitting at a computer writing about how desperately I wish I had someone I could be spending a few hours with. I don't think I'm ever going to be happy/satisfied. 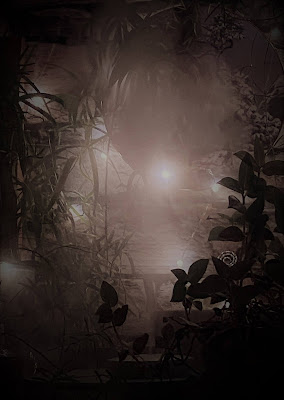