Living in the world I live in, growing up in the world I grew up in, being surrounded by the people who have shared my life, it's not easy for me to be insulted. I've heard it all before, had everything thrown at me when it comes to verbal abuse. There's nothing new anyone can say to me.

As a 12 year old my own grandmother - what an evil bitch she was - brought me back a t-shirt from a holiday she'd been on, one which didn't include us (my parents and brother). Funny how she was allowed to have a holiday without us, yet we weren't allowed to have one without her. So many ruined because of her spitefulness; it wasn't until I was in my late teens that we were actually able to go away without her and that was only because she'd screwed up so many trips in the past. Anyway, back to my "gift". I said t-shirt but it wasn't; it was a sweatshirt. It was white - anyone who knows me knows how much I dislike white, and emblazoned across the front of it were the words "I may be FAT but you're ugly and I can diet". Now, I get the sentiment behind it, and the worlds themselves are very true, however, who buys such a thing for a 12 year old to wear? An age when words can break a child, words that she knew had been used against me so many times during my childhood. The woman was vile.

My Mum, bless her, she'd tell me it was "puppy fat". What she should have done was taken away anything that I could eat which was going to make me gain weight! Of  course I went through a phase when I was a bit older when I realised that having some extra curve to me was most definitely to my advantage - or so I thought at the time; that was another big mistake I've made in my life. It's not all fun-and-games when you find yourself getting attention that you haven't courted! Oddly that attention is what turned me into the person I am right now.

I've struggled with my weight my whole life. Putting it on is a piece-of-cake (not literally though as I'm more of a savoury person than I am a sweet toothed one). A bowl of pasta here, some cheese straws there, and the odd croissant (or 2) for breakfast. That's not to say I've not enjoyed the odd bit of chocolate now-and-again (usually at that wonderful time of month) and I definitely enjoyed way too many cans of coke or pepsi. Not wanting to court attention or have people notice me I decided to just blend my way into the background, make myself not stand out; the easiest way to do that was to allow myself to put on weight. An easy task. So that's what I did, and for the most part it has served me well. The insults I was subjected to as a child never happened once I became a heffer of an adult; just once has someone I don't know said something about me being obese. Even my nurse told me not to worry about it when I went for a routine check-up, telling me I was exceptionally fit on the inside; her exact words wore "you have the inner body of a 20 year old Olympic athlete" - to this day I cannot figure why not even so much as a hint of a smile crossed her face when I said "I know, I ate her". Basically what she was saying is I got against all those fat shaming pieces of shit in the world believe; I am fat, yes, but on the inside I'm super healthy. Such a judgemental world we live in!.

My doctor who I had seen a few years before when I was worried about how much weight I was putting on without trying to at the time, told me I was obviously meant to just be a "big old bird". Gee, thanks Doc, that was helpful.

My Mum once compared me to the Fat Controller from Thomas the tank engine - my brother was there to witness it and I'll never get over the look on his face when he heard her. However, from my Mum I can take it. I know she doesn't mean it in a nasty way, even if it does come across that way when she says such things.

Last week I decided "enough". Time to finally get my fat arse into gear and make a change. I'm buying elastic waisted clothes so they fit me and are comfortable. If I could spend my days slopping around in pyjamas then I would happily do so (in all honestly if I was a size zero I'd most likely want to live in PJ's). I would like to buy some nice clothes for a change; wear a shirt with shorter sleeves, have trousers that hang nicely rather than bulging out and riding up in the middle because my legs are so fat they rub together.

I figured the first step (rather than diving straight in to the deep end) was to cut out the coke/pepsi and so on Sunday I drank the last I had. It's not been easy; any of you who have ever found yourself addicted to anything will know how difficult it is, and with both cola's there are 2 extremely addictive ingredients; sugar and caffeine. I won't lie, cutting it out has been harder than when I quit smoking a decade ago. I never once had a craving for a ciggie, yet all I can think about is how much I want to pull back the ring pull on a can and glug it down. I've given it up before but those previous times I switched to pepsi max or coke zero so I was only giving up the sugar and not the caffeine as well. Water just isn't cutting it, and whilst I can get the caffeine hit from tea or coffee there are only so many of those I can drink in a day.

Tuesday the headache started; an absolute splitter. I felt as though someone had taken an axe and they were embedding it into the back of my skull through to the centre of my brain, whilst simultaneously 2 different people were slicing into the very back of my eyeballs and someone kept smacking a hammer in the middle of my forehead. I took aspirin, paracetamol and ibrofen; nothing came close to touching it. My head pounded all day; I'd not slept well the night before either which didn't help. I was tired and in pain. I thought I'd sleep well that night. Turns out I thought wrong. I always thought caffeine was meant to keep people awake, keep you alert; that would appear to not be true for I've not slept at all this week.

The headache got worse and by the time I finished work yesterday - having worked a 12 hour day - I was struggling to see straight. In a way I was glad the weather had turned out to be so bad (torrential rain and gale force winds) as I was originally meant to have been out last night with the photography group I belonged to. Instead, I got to spend my evening with my Grandfather, and oddly enough, for someone who usually winds me up to the point I want to beat him with a spork, I found him completely tolerable. Right up until about 20 minutes before he left. 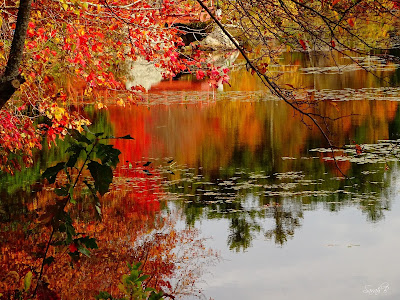 The picture is one I took on 20th October 2019. 2 years before and a night when I did not have to tolerate the man. I've added it to this post because it makes me smile, reminds me of a really happy time in my life. A time when the people I was around accepted me for who I am. A time I got see/experience some really amazing things.

Back to last night. My grandfather knew that I was giving up the coke; he'd asked what was going on when I was drinking water so I'd told him and explained the reason I was giving it up was because the pop (ooh, how old am I? pop) costs £1 per can, whereas the water I was drinking is free - to a point, I still have to pay water rates to our local water company but I'm paying that anyway so technically it's free.

Imagine how I felt when my grandfather said to me "it must be hard for you, must make you ache. Is that why you have a bad knee?" It's not the reason; I have a bad knee because I slipped down a 20 foot bank, landing at the bottom with my foot bent back behind me, although I am sure carrying extra weight certainly doesn't help. I answered "no, why would you think that".

His answer to me?   "Well, seeing how you're so big you look like you're carrying 3 babies I thought that might be the reason".

I saw my Mum tense, knew he'd just pissed her off beyond all doubt but wasn't going to have her stick up for me. I also didn't want her kicking off as I knew she would; I've seen her lose it with him before. Instead I looked at him and said "there are no words to tell you how insulted I am by what you just said, in fact I don't think you could have insulted me more if you tried".

I'd like to say he apologised but he's such an arse he won't have thought he'd said anything wrong.

I'll deal with it in my own way, move on from it, put it down to just another ignorant creature who doesn't deserve any space in my thoughts; I just need a few days to process it first, find the right box to put it in or else it will fester in that dark place where all the other abuse (physical and mental) used to fester and that's not a good place for me to venture into again. I've sealed that lid as tight as I can.

"The pen is mightier than the sword said Edward Bulwer-Lytton and my goodness was he right, because words are far more damaging. My Mum would tell me to say to the girls who bullied me in my infant/junior years "sticks and stones may break my bones but words will never hurt me". My Mum lied (not the first time; I've never forgiven her for the spider lie, but that's a story for another day). Broken bones, bruised and battered bodies heal, but those words, they stick in the mind and can swirl around torturing forever if you allow them to. They surely do hurt far more.