I am loving having my number 1 niece live up the other end of the road from me. I get to see her at least once-a-week now instead of once-a-month (if we could find the time). Every-other-week I am collecting her number 1 from school; every Friday my Mum will be doing the school run so I'll get to see her number 1 after work too. Mind you, not so sure on the school she's going to! Yesterday I picked her up for the first time. I couldn't find her classroom to begin with so was hanging around the playground for a while trying to figure out which room I needed to be, before seeing the name of her classroom on a window about 20ft along from an open door with a teacher standing at it. I asked if she was the right class, she said she was, then asked who I was there to collect. I grabbed the kid, walked her back to mine, and had her with me at least 20 minutes before her Mum called me - I didn't see the missed call until after the youngling's Dad arrived to collect her, then I noticed many missed calls. It transpired that my number 1 had got confused and booked her youngling into the 'after school club' yesterday by mistake. It took the school 20 minutes to realise the youngling wasn't at the club at which point they then frantically rang and texted her Mum to find out who had picked her up from school. Imagine if I'd not been on the list as one of the people who is allowed to collect her. I literally could have been anyone; they never asked my name or for any form of ID to check who I was. I think they may well be changing things today!

Anyway, the school the youngling is going to is just behind my house; my shop is in the middle of the road we both now live off, so my number 1 passes by every day. This means she will sometimes stop off as well for a chat. I've seen her more in the past month than in the past few years. One day last week she popped in with her number 2 for an hour. He's just over a year old and hasn't yet learned to give me any stick so still loves cuddles from me. I'd finished doing what I needed to get done in the shop so we went and sat in the office. I popped the little fella on my desk next to me, and his Mum was sat across from me at a 90 degree angle. My desk is next to an open doorway; all that can be seen outside the door is a few willow branches.

Suddenly, number 2 dragged his attention away from his crazy aunt to stare out of the door into the passageway. A few seconds after doing so a really huge grin spread across his face. We watched, totally transfixed, for the next 20 minutes as he reacted as though someone was playing hide-and-seek with him. Each time he would look to try and see around the door as though the person he was playing with had stepped out of view, before jumping a little and smiling the biggest smile as though whomever was there had then stepped back into view. It was the oddest thing I have seen for a while.

At one point he wanted to get down so I sat him on the floor by my feet and still he didn't stop; looking upwards as though he really was looking at someone. Each time he grinned or looked to see around the door frame I checked to see if the light had somehow changed and that might have been what was catching his attention. The passageway does lead down to the front of the shop and the sun comes through the main door; with people and traffic passing by shadows and light can easily scatter about, however, when the light/dark did change it made no difference whatsoever to his behaviour. He smiled/laughed always after having just strained to look around the doorframe.

There was one moment when he looked away; that was when he pootled into the office a bit more, sat down and put his hand out as if he was stroking a dog, or cat. His Mum said he does that a lot in their house. I remember reading somewhere once (back when I believed in it all) that kids will see things we don't because they've not been taught that what they are seeing isn't real. I get that, understand it. As we age and tell our parents things they will inform us there is no such thing, or that something won't happen. I used to be terrified of the dark as a kid, and scared of dying. I literally threw myself out of bed once when I was 4 or 5 so that I could sleep in with my Mum and Dad because I thought they were going to die and I didn't want them to. Goodness only knows where I came up with such an idea, although I had an older cousin who made me terrified of school toilets (in fact any toilet really; pubs, clubs, shopping malls even other peoples houses if they have a mirror) because she would tell me stories about ghost kids in school toilets. This was long before JK Rowling had even considered Harry Potter and a character I believed name Moaning Myrtle who haunts toilets? I've never read the books or seen the movies so I may have got that wrong, but I'm pretty sure when we named our dog Myrtle people kept on about it being due to this character and would tell me things about her. Just googled her, and apparently she does haunt the girls toilets. I wonder if my cousin knew JK back in the day??

I've had many people over the years tell me there is a guy in my shop when I've been here alone. I've caught glimpses of a guy in the shop at times -  just a pair of legs a couple of winters ago which creeped me out a little. There are a few dogs who will pull their owners to the same spot the little fella was looking at whatever/whoever he was looking at. Those dogs will either sit and stare, or start barking. One will sit a few feet back and whine. Who knows; maybe the energy is slightly different there. It's at the point where the light from the shop doesn't quite reach any more so it's the changeover spot from light to dark; this would make sense with regards the animals as they will pick up on the temperature difference that happens too.

We didn't tell the little one that there was nothing there, nor did we try to get him to stop. In fact every time he smiled or laughed, we smiled and laughed along with him as if we were experiencing the same things he was. He'll learn eventually and in his own time. For now we'll leave him be; he's a kid whose little brain is trying to take in so much information which needs to be processed. Some of us adults find that hard enough to do and we've learned how to train/prepare ourselves for such things. A 13 month old little fella has enough to be dealing with; he doesn't need us adults trying to alter how his brain is working. 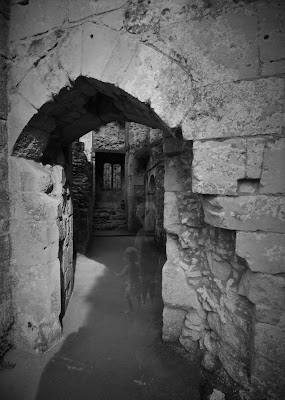 On another note along the same line, I have also managed to upset someone this week by my questioning of their paranormal experience. A gentleman, on a local ghost/paranormal facebook group I belong to - just because I don't currently believe doesn't mean I am not always looking to believe hence why I am a member of this group, and some others - has security cameras inside his home and one of them has captured many, many so-called "orbs". However, anyone who is really anyone, knows that they are dust particles, or moths flitting about the room which the infrared of the camera picks up.

He was asking people how many different spirits he thought there were so I replied "I'm sorry; I believe they are just moths and bugs flitting around which the IR has picked up on". At no point have I been rude, or told him he's imagining it, or making it up.

His response to me was "no there are not they are orbs we clearly see them with our own eyes" - well, that's me told then!

Another guy then commented "Sarah is right buddy. There nothing but dust or bugs.. Sorry for the bad news." Again, he has been very polite with his wording and apologised.

The original poster? "I know different there are no normal moths in our home and you can clearly see the orbs when you're in our home" That's the guy who agreed with me being told also!

Wrong, I know, because I shouldn't have as the gentleman obviously has some kind of issue, but I really did laugh when he then said "we did call one of the things a moth then caught it perfectly on camera looks looks like Casper complete with a small trail behind it" WTAF? Looks like casper?!!

I never bothered to respond to anything else. If someone believes that strongly in something then who am I, or anyone else, to tell him different? I did have another little chuckle to myself though (to begin with; I have since contacted the person running the group who I believe knows the gent asking her to keep an eye out for him as I am a little concerned for his mental wellbeing) when he later posted another video of his kitchen which does have a shadow flit across. As we are unable to see the rest of the room, whether there is a window behind where he was with the camera, or if there is a light source of some kind it is really very difficult to tell what may have caused the shadow. The wording he attached to the video post is "this is from our kitchen but I bet some still don't believe in the footage this is further evidence from my home in along with the orbs ect this goes with the videos of orbs ect".

Someone else bought into his video about the shadow being ghostly, however they did say they "don't beleive it to be demonic" (ooh, sorry, back a step; he shared the video from a post that a "Paranormal and Demonic investigator" had shared which they worded "Demonic Shadow figure cught on camera in deomnically infested home where I am currently investigating. I set the camera in one of the most active rooms in the house, and this 5 second video will show the Demonic figure apprroach one of the crucifixes I have from a church, then leave the room. This is the evidence we all seek of true demonic activity." The gentleman with the orbs replied to the other poster in regards to her not believing it to be demonic "this may not be but I was taken over by a demon daily for a while".

He was then asked "wow!!!!! Did you not say a safety prayer before going? Xx?". Not sure where she thought he was going as the video was apparently shot from inside his own home!

I do find the gentleman's response about him being taken over by a demon really concerning.

I also currently have a friend staying in a "haunted house" who earlier posted a daylight video of some 'orbs' in the passageway leading down to her room. I'll talk to her about her "dust" when I see her next week!