We live in a world where we can interact with 'celebrities' (I am using that word lightly in regards to some of these people). The average, everyday person can message them, reply to them, and be shared/retweeted by them. I've replied to the odd one-or-two at times, as you do. I've been retweeted by a couple when they've seen something I've shared. At the end of the day they are still humans, like the rest of the world. However, they are also different to those of us who don't move in the 'celeb' world in the fact they have many, many, many more followers than most; they also have people who will hang on their every word, and this can be a very bad thing. It's also something some of then really need to think about before they hit the "send" button.

I was following a guy called Jason Manford. He comes across as a genuine, ordinary working-class guy. He's apparently a comedian (although I've never seen him anything so can't comment on whether he is, or isn't). I like his attitude to things, and his thoughts on our government match mine. I started following him though when a few years back he picked up on a tweet from someone with regards to a charity and ended up getting his followers behind the fund raiser, who had wanted to raise a minimal amount of money and ended up raising tens of thousands. I figured anyone who was helping out us 'normal' people had to be worth following. And until this week I still believed that. Now, not so much.

He had shared something regarding our police force and the government; a tweet I fully agreed with, however, I had a read through some of the comments and came across someone who was going on about how kids get into so much trouble these days because they have nothing to do anymore. I couldn't stop myself responding to her, because I get so bloody annoyed when people say such a thing. Kids have more these days than they have ever had so I commented about how growing up we didn't have half the things kids have these days so their excuse it's because they are bored is pretty much moot. I was very careful in how I said it so as not to upset anyone; it was a reply to the one person who had said about how kids get in trouble because they have nothing to do. Someone else may have seen it if they scrolled through but for the most part it was going to get lost and caught up in among the hundreds of other comments. If the person I had replied to had an issue with my response that would have been fine.

What wasn't fine is that Mr Manford took the time to make a mildly sarcastic comment to my reply without actually bothering to read what I had put, or reading the comment I was replying to; instead he took to interpreting it in a way that made him look good when he tweeted out his sarcasm, which, in the grand scheme of things was very light and quite tame in my eyes. Something I figured he'd done to make himself feel better. I saw it, thought to myself "twat" and planned to carry on with my day, however, his response then ended up at the top of his twitter feed meaning any of his followers would have seen it - did see it. This in turn made it look as though my comment had been directed at him and his original post, making me look like a bit of twat and therefore making himself look good amongst his followers because he'd been able to come up with a sarcastic reply to me. I can't help wonder if his intention was to belittle me in some way, and make it look as though I had spent my childhood living in an ivory tower and was out of touch with the 'real world' (something which could not have further from the truth if it tried). His response, which worked in his favour, making him look good (in his world at least) had the opposite effect for me and opened me up to the 'Trolls'. I must give him thanks for feeding them for me! Oh look, my sarcasm works because it's directed in the right area. A lesson he could do with learning.

I'm not going to share what was said and sent to me because I don't feed trolls if I can help it, as most of them are out there purely to garner themselves some attention. By giving them what they want they will go off and do it to others and not everyone is in the right frame-of-mind, or able to cope with abuse (most of which is very personal) when it's directed at them. Instead I hit report, delete/block those who spewed their vileness at me and (usually) get on with my day. Thank goodness I was viciously and verbally abused as a kid by the school bullies though, or some of the things I was subjected to, via the many DM's I received from his followers, might have really hurt me. It's a great job I don't suffer with any kind of mental health issues too or those same comments could have seen me pushed very close to, if not over, the edge!

I'm pretty sure Mr Manford will have been part of the whole #BeKind movement a few years back. How ironic that he would then use the same platform he happily shared that hashtag from, to put one of his followers into a position which opened her up to people who wouldn't know what being kind meant. But hey, it got him more attention, will help him sell more tickets for his current tour and at the end of the day I guess that is all which really matters.

I am no longer following him; will no longer interact with people unless they interact with me first. I'm pretty sure I'm going to run across trolls again at some point in the future; the very fact I have this blog opens me up to them, and I'm still going to put my own tweets out, but at least then they do it because of me per se, and not because someone else has thrown me out to them. They're also much easier to starve when they are your own trolls and not attached to someone else. 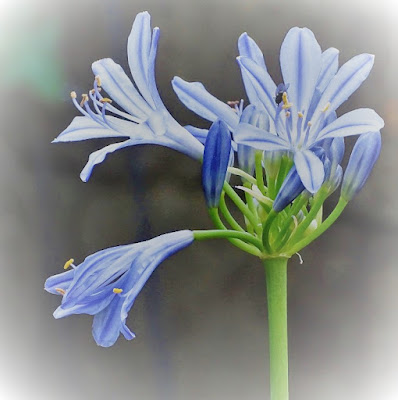 I decided to share his reply to me; at no point did I say there was no crime, and when I replied to him I did point out he had read only what he wanted to read and had interpreted to suit his own end. It's very difficult in just 280 characters to say it all - even harder when you add never to the tweet twice taking up spaces. My point was that making an excuse for kids causing trouble because they are bored should not be a consideration and has nothing to do with the dwindling police workers we have. 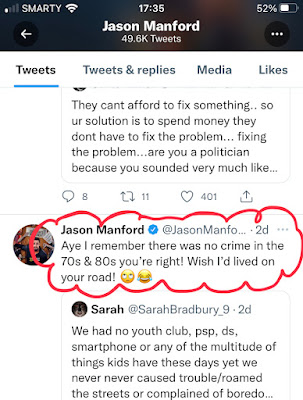