7 years ago on this very day I did something I never-in-a-million years would have believed I could do. I packed a suitcase (borrowed from my brother), got my friend to drop me off at the local bus station, where I sat down in my previously chosen seat next to the window (a bad choice I was to learn when at the very next stop a lady a lot bigger than I - and I'm not someone who will ever wear 'skinny jeans' with so much baggage she wedged it under our feet and on both our laps) which I spent a lot of the journey squished against, and hoped that traffic would not stop us from reaching out final destination in time. That final stop was Heathrow T5. I was going to America. On my own!!

3 years prior to this day I had quit smoking, yet rather than just allow the money I had been wasting on slowly killing myself each week, I gave it to my brother; he was told he was never allowed to let me have a penny of it until there was exactly the amount we had agreed upon; the amount which would get me on my travels. We also agreed that if at any time I even so much as just lit up a cigarette (even if I never took a single puff) then any money he had safe for me, he would be allowed to keep. I wish I could afford to do it again now but also the cost of living has increased and if I hadn't quit when I did I would have had to do eventually because there is no way I could have afforded to keep going. Luckily (or was it fate?) I chose the right time to do it.

At the time my Mum was also meant to pay me back some money she had borrowed off me a few years previously, and a friend who I'd paid for to come away on a long weekend a few years prior were both told as long as they paid me back by the time I left I didn't care how they paid me. They could give me so much each week, or month, or save it themselves and give me the total amount when I was ready to go. As I sit her writing this today I am still waiting for both of them to pay me back. My friend did start to make the effort, sending so much each month but it was costing almost as much to post it to me as the amount she was sending so I told her to wait until she had it all ready and to send the lot in one go. It ended up taking me a little longer than I had hoped before I could head off as I then had to get some spending money sorted as well, but I did it. I am forever grateful to my brother who even when I said I couldn't afford to pay him one week still made me get the money (I had to go overdrawn) as he pointed out if I'd still been smoking I'd have happily gone overdrawn for a pack of ciggies. He didn't let me get away with a single week, and when I needed some work done on my car he refused to let me use anything from the holiday fund as I'd told him he was only to let me use it on the trip.

I remember feeling nervous about what/who lay ahead; terrified we were going to get stuck in traffic and I wasn't going to make it to the airport in time, and the most excited I have ever felt. I've heard people say "it was a dream come true" and until the moment I sat on that plane I never really believed in such a thing, but it really was. Thankfully the flight was the best I've ever been on - I love flying once I have landed safely on the ground; the thought of a plane crash though scares the crap out of me and whilst I'm a nervous flyer I'm not someone who needs to take pills or anything to keep me calm and I try to enjoy it for what it is. The outbound flight though was amazing. The seatbelt sign went off as soon as we were airborne, and didn't come back on until we were landing. I had an aisle seat, which I prefer in a way, however, the woman in my row with a window seat kept the blinds down even once we were over land and I found it really hard when we were flying over South Dakota as I desperately wanted to be looking out of the window; I could see a few bits from the seat in front but it just wasn't the same.

The guy in between me and the window lady was Scottish, and not really that talkative so I popped my earphones in, watched a few movies and tried not to fall asleep in case I snored, or drooled on him. Strangely enough he ended up being one of 2 people who absolutely made it the best holiday I have ever been on. Him and I laughed, a lot. Just goes to show you cannot judge a Scots man by his flying attitude :) What I wouldn't give to be on that flight right now.

The trip and whole experience changed me in a way, although sadly only for a short while. Out there I had a confidence I had never known I could have. I was 100% myself. I didn't have to pretend to be someone else because that was what was expected of me. I didn't have to behave in any way other than how I wanted to (obviously I was always respectful because that's just part of being a decent member of the human race). If I wanted to go and do something I went and did it, yet when I didn't want to do something I didn't do it. It was all so new and alien to me. It didn't take long for me to go back to who I used to be however I am working on trying to be the Sarah I was back then, to be the Sarah I am right now. 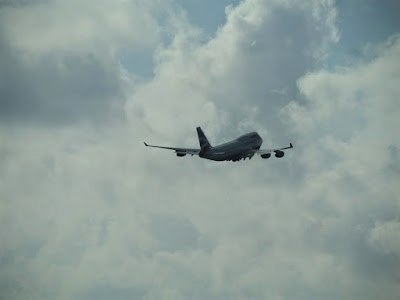