lover, errrr, s do come true? There could have been so many different ways I could have started this. I absolutely love that some of you are currently sitting there trying to figure out what I'm on about 😂 Welcome to my world!

I was having a nose through instagram the other day - my goodness, what a way to waste a few hours without realising you've wasted any, when I came across a meme (it used to really annoy me when people shared memes on there because when I first had an account I did so believing it was just for sharing photographs; now though it's like all the good/fun bits of facebook without all the narcissists) which said "If you can remember your dream it's because you're being sent a message". Ooh err.

Well, I'm pretty sure most of you, like myself, often don't remember a dream a few minutes after waking. Even the worst nightmare can be forgotten by the time you get down for breakfast so I thought to myself "maybe there is something in this then". I'm always looking for things to prove to me there is more-to-life than what we know whilst at the same time growing more-and-more realistic that there absolutely isn't. Oddly enough I can still remember a dream I had when I 4 years old. How's that for memory recall? Can't remember why I opened up my last browser tab, yet can remember a dream from a few decades (and more) ago. Anyway, that's a post for another day, or maybe I'll share it later.

The very same night after reading the meme off I pootled to bedfordshire, read a book for a little while (about Lancaster Bombers in case anyone is interested; written by John Nichol - please purchase in a local book shop if you can and not one of the big online retailers. Small businesses really do need everyone's help) before dropping off into a nice sleep, where I had a dream. 5 days later and I can still remember it. How about that then? This is where you, Dear Reader, come into play. If remembering means that they are trying to send a message, what on earth is mine trying to tell me?

It started with me standing beside my Dad to his right (he's been dead since 1993 but was very much alive in the dream and around the age of 45 (give-or-take a few years)) with my Mum standing standing between the 2 of us but a few steps behind. My brother was nowhere to be seen. Mum had something in her arms; I have no idea what (I'm thinking cat or dog which had died although none of us seemed sad so that wouldn't make sense as we'd all be devastated) however whatever it was she was there to pop it into the hole my Dad had dug into the ground that I was standing looking into making sure it was the correct size. I have to say I was very impressed; he had dug out a perfectly cylindrical hole that went down roughly 6ft. This had been dug out on the field outside the front of our house. It was slightly to the right of the field, outside 2 other houses (our houses are terraced on the left and top, semi's on the right, laid out in a small rectangular horseshoe shape - there are only 22 houses in total. 12 on the left, 6 at the top, 6 on the right. I have no idea why telling you the layout feels right; it just does. In fact I've stopped to do a little drawing since mentioning it so you get a better idea. I've added it further down the page. X marks our home, the circle where my Dad had dug. 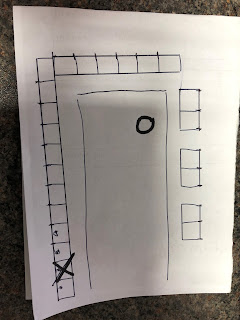 As I continued to look into the hole, suddenly the earth at the bottom (really nice earth which is wrong because where we live it's pretty much solid clay) began to fall downward before eventually disappearing into some kind of cavernous space below. The space was around 18 feet long x 12 feet wide. In total from where I was standing the drop was around 9ft. Even though the cylindrical hole was only around 2ft in diameter I could see all of the cavern (don't you just love that about dreams? They let you see things you wouldn't normally see). The whole thing was lit up a bright white as if it was covered in daylight bulbs, however, in the far right corner at the top there was an iron grille that had a river rushing, creating waves with frothy white horses. It was around 12" below the grille and was glowing the most amazing ice-blue colour (you know the blue you see on icebergs which always seems really odd as they should be either clear, or white?). There was another grille in front of it, with a 24" gap of soil between. On this 2nd grille was the body of a man. He was dead and had been for a while, although not long enough for him to have begun to decompose; it was still easy to make out his features. He was about 6ft tell, with short dark hair, in his late 30's/early 40's. I have no idea who he was, didn't recognise him at all. He was stocky but not fat, wearing a pale blue shirt, dark denim jeans and black work boots. I didn't go down into the hole at any point so never got close enough to see how he had died but automatically we all assumed he had been murdered.

Whilst waiting for the police to arrive (I called them, took 15 minutes to get through to anyone and for some reason I had called 111 and not 999, or 101 - that could be why it took so long!! ) we discussed how lucky the houses at the top had been never to have crumbled down into this cavern. How strange it was that we'd finally found the underground river we had only ever heard talk of before but that had never been proven to exist and grateful that there was nothing under our house and we weren't going to disappear into a giant sinkhole. None of us seemed particularly bothered by the dead body, or by the fact that any second the very ground we were stood on could give way.

Eventually a tall, skinny guy in his mid 20's with a shock of curly ginger hair, cropped short to his head arrived; we thought he might be a detective of some kind but no, he was a local reporter who'd picked up what was going on via a scanner. He wanted to have a nose down the hole to take photos. We weren't going to let that happen so my parents stood guard around the hole whilst I dragged him away to my house where I told him about what we had found and how we came about it all.

Then I woke up.

So, come on then; what the bloody hell is all that supposed to mean? If they are meant to be trying to tell me something what kind of message am I being sent?

Bunch of bloody hocus pocus nonsense really. I think we just remember some better than others because they are so random, or maybe they happen deeper into our sleep and not just as we are awakening at which point they can be easily forgotten as we are concentrating on other things.