Yesterday, I discovered the very first words to the memoirs I will one day write (I’ve been telling myself I’ll get them written for years) and because I’m in a good mood I’m going to share them with you.

(in my best Janice, from Friends, voice)..... "Oh my god" (actually what I’ll probably say is “oh my fucking god, although I guess that might go against me in getting it published) I stepped on the scales this afternoon at my brothers and my whole world exploded around me……

You’ll have to wait until I’ve written them to find out whether it’s a good-or-bad OMG and whether the explosion brought my world crashing down around me, or cleared the way for me to move on in a fabulous way… ooh look, if I was on facebook right now (deleted it again the other week; don’t want to go back although my brother made a good point about it yesterday having some small uses so I probably will do and sooner, rather than later) I’d be being accused of ‘Vague booking right now’ teasing you with my wiley ways. Of course I could always “inbox you” to let you know for sure. Don’t you just love a vague booker? Attention seeking of the the highest order. I’ve done it, not intentionally, and thankfully my brother has pulled me up on it, or I’ve realised when someone has asked a question of what I’ve posted. In a way though aren’t we all looking for a little attention, recognition? You’re not meant to have agreed with that, because we’re not. I try to use mine (when I had it) to share things which might bring a smile to someone’s face. I don’t need thanks, or recognition for it; I don’t want any attention for it, just knowing someone who is having a bad day might have smiled because of something I shared is enough for me. I also like to use it for keeping the photo’s I take that I like in a place I can access them, other than relying on my backup drive, google accounts (I have a few specifically for photographs) and the clouds; you just never know when one of those others may have an issue and the whole lot gets lost. Best to have too many, than not enough.

I tried a little ebaying this week. It’s not something I’ve ever benefitted from before when I’ve tried to sell stuff I have laying around, however, I put an old camera of mine on there, and got 40% more than I thought it was worth; happy days, especially as I had originally planned to just give it away. I also tried to sell some old magazines my Dad used to get that have been kept in the attic; I didn’t have any success on those but I’ll keep going with them. Even if I only get £1 for the whole lot (there must be 100 of them) it’s a pound more than we had (which could be used to buy a winning lottery ticket!!!) and clears some space in the attic, which is pretty much chock full of stuff. Any money I make from it will go into my savings, that I hope to be able to use on a holiday somewhere, however, I am well aware my car is 7 years old this year and has (so far) not cost me much; at some point, as someone who has never been lucky with cars, I’m aware I could end up having to draw on it to pay for something car related; keeping fingers crossed that doesn’t happen! The fact I sold something for more that I thought it worth shows me there is hope. The only downside is now having to get to a post office to send it to the winning bidder.

Another good thing is that I had my 2nd covid vaccine yesterday, and thankfully, unlike the first, I’ve had no iffy side effects. Bit of a dry mouth when I woke up, and a headache that could become full blown but is just hanging in the background. This is good as well because I’m booked in to make a blood donation on 1st June, and if you have any side effects like the ones with my first (jeez that made me feel rough) then I’d not be able to donate for 28 days. This way I’ll be all good to go and give a pint of my red stuff; it’s been a while since my last donation. Partly because I had chickenpox (I know, at my age; it was not a pleasant experience, I can tell you) and partly because they cancelled on me twice. I also absolutely hate with a passion the chairs they now use; it would be fine if you were allowed to sit upright - as you can in the US - but over here they tip you back, and because I have low blood pressure if they bring me up too quick I almost pass out. Was most embarrassing the first time it happened as I had taken an old friend along to try to get him to donate; of course, I nearly passed out so they had to tip me upside-down and drape wet towels on me. That put him off for life, and I’ll admit didn’t do a lot for me wanting to continue. Before the chairs they had beds and I never had a problem with those at all. It takes them forever to find my veins, but once they have it my whole donation is out in under 4 minutes. They’d come over, take the needle out and I’d be up, off that bed, and getting my cup of tea. Now I have to be brought up in stages, and even when I’m good to move getting to my cup of tea takes a lot more thought. I also think about how the time it takes me to get out of the chair is time they could use to fit someone else in to make their donation. Still, it’s better to do it, than not, hence why I am booked in. I’d recommend anyone doing it if you are eligible. Even if you don’t like needles it shouldn’t be an issue as you don’t see them doing it - unless you want to; I always watch :) The website tells you all you need to know about it; it won’t hurt to look into it. Go to www.blood.co.uk 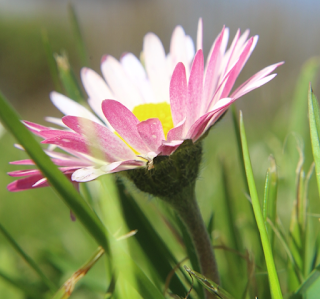