10 days ago I deleted (deactivated just-in-case I decided to go back) my facebook account. Something I do every-now-and-then, partly because I find myself spending too much time on there, and partly because I have some friends who just bore the shit out of me with the crap they post. I do it for no other reason than my own sanity - I also really hate, in fact despise with a passion, their crappy security settings and the whole "people you may know" - I managed to find people and add them before they shared up anyone-and-everyone to me, so could manage again perfectly well without it. That one really does piss-me-off. I have (had) my settings so nobody else could see my friends; my Mum has hers set to that too (I know because I set it up for her) so when my friends were then offered up as people my Mum might know (and vice versa) I wondered why they gave the option to hide my friends list in the first place?.

Of course, I could delete these people who bore me, but doing so doesn't make a jot of difference because you still come up in their "people you may know" feed at a later date; totally f**king pointless. The only way to really stop them is by blocking them, then some twat you share a mutual friend with will tag them in something you share and you get the whole "why did you feel the need to block me?" scenario. I just want to be able to add the people I want to share stuff with, and who I am happy to see their shared stuff, and be done with it. I've missed out on a lot in those 10 days which family members I absolutely adore have been sharing (luckily I can still view from my Mum's account, though this means I have to keep logging in as her and that's not a good thing to do).

Ooh; that's another thing I hate about it. I have my own business, yet can't have a business page without having a personal profile. Ok, fine, I can set up an account as a normal human to be able to run the business page if I have to (although they are getting tougher on people having multiple accounts) and I've added a few friends/family as admin just to be on the safe side. However, sometimes I will click on to the page and use it as I should be (for my business). This means replying to people's comments and more-often-than-not it won't comment as the page, but as my personal account, so then I get random customers adding me as a friend. The whole thing is just so badly flawed I'm amazed it's been able to take a hold of so many lives so easily.

Anyway, I'm digressing; this wasn't about facebook (not really) although it has contributed. No, this was about me (as my life always is).

Those of you who have followed my waffled crap over-the-years will know how badly bullied I was as a child, and how I still allowed certain people to bully me as an adult. For a massive portion of my life I felt I was worthless as a human being because of it. I believed I didn't' deserve, nor should receive, anything good. Years of being put down will eventually make you believe such crap. Even among friends I would often end up feeling like I was just there to make up the numbers. My camping group of friends are people I've known years but even being with them I have sometimes wondered why I've bothered, because when it comes to being in a group of people having a conversation, it would appear I must be as boring as I believe myself to be (let's face it, my blog entries aren't exactly riveting). We can all be chatting, and I'll join in the conversation and suddenly another member of the group will talk over me, direct the conversation away from me, and they'll all then continue with the new line of convo, leaving me sitting there like a lemon. My Mum will also do it to me, although she is older and sometimes has to say things as they pop into her head, but having had it done to me throughout my life pretty much every time I've been among a group of people (friends, family and most especially the bullies) I've learned to now just sit there and accept that it's because I have nothing of any insignificance to say, or of any interest that someone wants to listen to. Oddly, once I accepted that, I finally realised how I was being bullied still as an adult by some people (who got kicked into touch) and I started to become a more confident person in myself. I guess accepting who we are is a good thing, even if it's come about through something which has made you feel so bad.

Turns out I'm also insignificant on facebook as well though - and that one did hurt a little. I'm not one of those vaguebookers who post shit to get attention (you know the ones, who say "I'll inbox you babe" when their friends ask "you ok, hun?"). I don't make a big announcement that I'm deactivating; I just do it. Usually I last 3 or 4 days, so nobody notices I've gone. This time though, it's been the 10 days and I've learned that I really am just another-face-in-the-crowd. I don't know whether to feel happy because it means I don't have to reactivate, or sad because it's just gone to prove how little I am noticed. Sunday my lovely BIL said to me "I shared the photo of the flowers you did for my Mum on fb". I replied "lovely; not on there at the mo so haven't seen". Both he and my brother said "oh, didn't notice you'd gone; why's that?" Ouch, brothery.. 😂😂 (they're allowed not to notice as I see/speak to them at least once-a-week, although when he said to me just yesterday "have you seen the photos <insert name of person here - no, I'm not sharing who he was talking about with random strangers; see above about how I don't even share with friends/family> I had to remind him that I'm not on there any more so haven't seen - being the genius that he is he has come up with a plan I shall do some research on which may get me back on there but only for specific people). Then today, a guy I run a group page with asked if I'd seen the responses to the latest post. I replied "no, because I'm not on there any more" and he hadn't even noticed I was missing, even though he's been posting things I would have/should have replied to. It was then it struck me that nobody appears to have noticed. I go out of my way to try and keep in touch with everyone on there as often as I can (not always as often as it should be) and somehow am one of those saddo's that notices when someone does disappear, and yet nothing; not one person has not only not missed me😰😰 I'm just glad I'm not the Sarah from 5 years ago; I'd be crying into a bottle right about now!!

So, am I incognito? or just totally insignificant?

Even better question; do I go blond and have a bob cut? 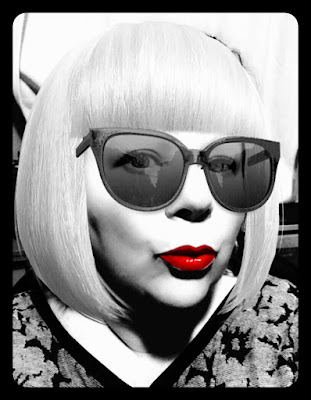